Tickets for this concert are also available to purchase via Dieselverkstaden.

The programme begins with Beatrice Gibson’s 2012 film Agatha — a psychosexual sci-fi about a planet without speech. Its narrator, ambiguous in gender and function, weaves us slowly through a mental and physical landscape, observing and chronicling a space beyond words. Based on a dream had by the radical British composer Cornelius Cardew. 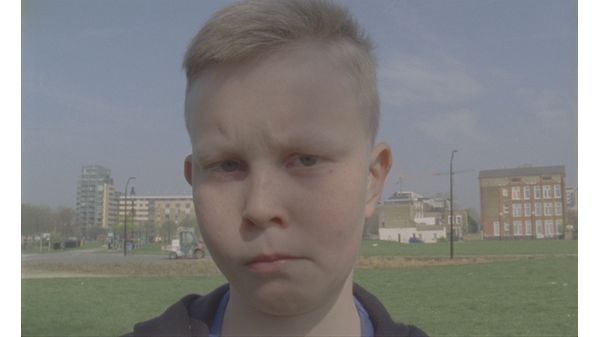 In Crippled Symmetry, a precocious 11 year old capitalist and his side-kick, an ailing composer, are the two unlikely protagonists of this experimental meditation on money, music and abstraction in post crisis Britain. The work is inspired obliquely by William Gaddis’ epic satirical novel JR (1975).Crippled Symmetries draws many of its elements, including its soundtrack and cast, from a four-day experimental music workshop conceived and run by Gibson and composer Anton Lukoszevieze, and staged at an adventure playground in east London. The resulting film is an exploration of abstraction in music and finance from the psychedelic perspective of youth. Narrated by a banker, playing a fictionalised version of himself, the film stages a series of scenes derived partly from Gaddis narrative and partly from the production process itself: a composer and a banker meet to discuss fiction; a class of 11 year olds pay a visit to the motorway beneath the NYSE exchange date centre in Essex; an illicit meeting at an abandoned fairground ends in spiritual death.

F for Fibonacci takes as its departure point American author William Gaddis’ epic modernist novel JR (1975). An eerily prescient, biting social satire, JR tells the story of a precocious 11 year-old capitalist who, with the unwitting help of his school’s resident composer, inadvertently creates the single greatest virtual empire the world has seen, spun largely from the anonymity of the school’s pay phone. F for Fibonacci develops a particular episode from JR, in which a televised music lesson is scrambled with a maths class on derivatives inside the mind of its child protagonist. Musings on aleatory music become muddled with virtual stock pickings and a theory of ‘market noise’. Unfolding through the modular machine aesthetics of the video game Minecraft, text book geometries, graphic scores, images from physics experiments, and cartoon dreams, blend with images from wall street: stock market crashes, trading pits, algorithms and transparent glass.As well as the writing of Gaddis, the film draws on the work of little-known British experimental educator and composer John Paynter, who infamously took Cornelius Cardew, John Cage and Karlheinz Stockhausen into primary schools, and who, along with better known figures such as art critic Herbert Read, was at the forefront of utopian post-war pedagogical movements orientated around child-centerededucation. Following Paynter’s lead, Gibson worked closely with 11 year old Clay Barnard Chodzko on a number of the film’s production elements, commissioning him to design an office in Minecraft and develop an existing character of his, Mr Money. Gibson and Chodzko’s ramblings on the subject of his protagonist lead the viewer through F for Fibonacci’s hallucinatory soup.

Solo for Rich Man takes American author William Gaddis’ epic modernist masterpiece, JR (1975) as a starting point. An eerily prescient, biting social satire that turns the American dream on its head, JR tells the story of a precocious 11 year-old capitalist who inadvertently creates the single greatest financial empire the decade has seen, spun largely from the invisible confines of the school pay phone.

In Solo for Rich Man Gaddis’ novel is overlaid onto contemporary London. Working with composer Anton Luckoszevieze and a group of children from east London, the film orientates around an experimental music workshop, inspired by radical educators and composers Brian Dennis and John Paynter. Staged within Shoreditch Adventure Playground – a site rooted to progressive models of learning and delineating a space for risk-taking – the film’s location echoes both the methodology used in its making alongside those deployed in unregulated financial markets. The film is structured around five musical pieces performed by Anton and a young boy called George, including the work of Fluxus artist George Maciunas and Chieko Shiomi’s Disappearing Music for Face.

The Edition Festival is proud to present a very rare three hour performance by the legendary Japanese ensemble Marginal Consort. The group has its origins in the East Bionic Symphonia — an ensemble formed at the radical Biggako School of Aesthetics under the tutelage of Kosugi Takehisa in the 1960s. Now a quartet of Kazuo Imai, Masami Tada, Kei Shii and Tomonao Koshikawa, Marginal Consort has historically played just one concert each year. This will be their first performance in Sweden.